A 2012 study by the Harvard Business Review identified the ability to "Code Switch Between Cultures" as the most crucial skill for 21st century managers.  Why is the ability to "modify behavior in specific situations to accommodate varying cultural norms" so important for success in the modern work force?  Because culture, the learned and shared values, beliefs, and behaviors of a group of people, exerts great influence over business, the work environment, career advancement strategies, and the job search process.  International student possess a unique advantage in the development of the ability to "code switch between cultures" because they have spent so much time living in a different culture.

However, international students who return home to seek employment sometimes do not recognize how much they have been influenced by their host country's culture.  For example, job seekers in the United States are often to encouraged to speak at length about their accomplishments and strengths, yet other cultures mights see this as boastful.  In the U.S., applicants are not expected to include any personal information in their application, yet in other countries it is expected than an applicant would include their age, race, marital status, end even a photograph on their resume.  Culture can influence the application process and employment in a variety of subtle ways. 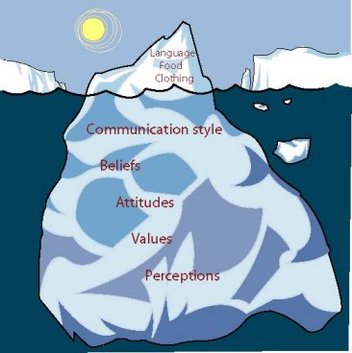 Elements of Culture and Their Influence on Employment

Views on Rules (Universal vs. Particular) In a universalist culture, the focus is on rules.  Contracts are readily drawn up, and "a deal is a deal."  In a particular culture, the focus is more on relationships than on rules.  Contracts may be modified or changed depending on the situation, and rules and realities evolve as relationships and situations change.

Attitudes about the Self and Group (Individual vs. Collectivist) In individualist cultures, the the emphasis is placed on the individual.  Decisions are made on the spot by a delegate, people achieve alone and assume personal responsibility, and vacations are taken in pairs or alone.  In a communitarian culture, decisions are more frequently referred back to the organizations by a representative, people achieve in groups, and vacations are taken in organized groups.

Displays of Emotion (Neutral vs. Affective) In neutrally orientated cultures, people do readily reveal what they are thinking or feeling, and cool and self possessed conduct is admired.  In more affective cultures, thoughts and feeling are revealed both verbally and non-verbally, and heated, animated expressions and displays are admired and valued.

How Status is Defined (Achievement vs. Ascription) In cultures where status is based on individual achievement, titles will only be used when relevent to situation.  Respect for superiors is based on thier performance and expertise, and senior manageres can be of varying age, gender, and background.  In ascriptive cultures, titles are used regardless of the situation and respect for superiors is expected and measures one's commitment to the organization.  Most senior managers are older males with a specific relevant background.

How Far Involved We Get in People's Lives (Specific vs. Diffuse) People from more specific cultures generally maintain relationships  that are direct and purposeful, and principles and morality are consistent regardless of the person being addressed.  People are generally more blunt, precise, and transparent.  In diffuse cultures, people relate in indirect and circuitous ways, and principles and morality are very dependent on the situation and the person involved.  People are evasive, ambiguous, and tactful in communications.

How in Control We Are (Internal Locus of Control vs. External Locus of Control) In cultures with an internal locus of control, people are uncomfortable when the environment seems unchangeable.  Conflict or resistance demonstrate strong convictions, and people believe that can dominate or change the environment they operate in.  In cultures with an external locus of control, people are generally more comfortable with shifts and cycles, and are more willing to compromise to keep the peace.  Conflict and resistance indicate a lack of sensibility, and are avoided in favor of harmony.

*Adapted from Riding the Waves of Culture: Understanding Diversity in Global Business by Fons Trompenaars and Charles Hampden-Turner.  Check out Fons Trompenaars informative and entertaining TedxAmsterdam talk for more info.
For more information the ways culture impacts the workplace and job hunts in specific countries, see our next section, "Country Specific Job Search Resources."
Next
Powered by